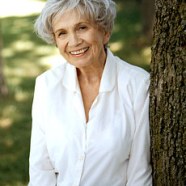 Posted by Kate Krueger on October 10, 2013 in Uncategorized | Leave a comment

“He tells me how the Great Lakes came to be. All where Lake Huron is now, he says, used to be flat land, a wide flat plain. Then came the ice, creeping down from the north, pushing deep into the low places. Like that—and he shows me his hand with his spread fingers pressing the rock-hard ground where we are sitting. His fingers make hardly any impression at all and he says, “Well, the old ice cap had a lot more power behind it than this hand has.” And then the ice went back, shrank back towards the North Pole where it came from, and left its fingers of ice in the deep places it had gouged, and ice turned to lakes and there they were today. They were new, as time went. I try to see that plain before me, dinosaurs walking on it, but I am not able even to imagine the shore of the Lake when the Indians were there, before Tuppertown. The tiny share we have of time appalls me, though my father seems to regard it with tranquillity. Even my father, who sometimes seems to me to have been at home in the world as long as it has lasted, has really lived on this earth only a little longer than I have, in terms of all the time there has been to live in. He has not known a time, any more than I, when automobiles and electric lights did not at least exist. He was not alive when this century started. I will be barely alive—old, old—when it ends. I do not like to think of it. I wish the Lake to be always just a lake, with the safe-swimming floats marking it, and the breakwater and the lights of Tuppertown.” ~ from “Walker Brothers Cowboy”

← The Delights of Poison and Bicycles What Stacy’s Teaching: King Lear →