Home » Novels » I Capture the Castle 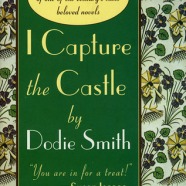 I Capture the Castle

Despite considering myself an Anglophile, I was somehow unaware of Dodie Smith’s 1949 novel I Capture the Castle until recently, when Jen W., a member of my book group, told the rest of us in the most strenuous terms that we must read it immediately. I quickly learned why it is capable of generating such loyalty (and Jen is not alone; it was named the 82nd most beloved novel of all time in the UK’s survey The Big Read).

In a series of journals, our heroine, seventeen-year-old Cassandra Mortmain, chronicles her life growing up in a half-ruined old castle in the countryside, complete with moat, towers, and gatehouse. The setup is ripe for romance-novel clichés, but Cassandra is relentlessly clear-eyed: “I am no beauty,” she informs us early on. Her family has fallen into poverty since her once-famous writer father begin suffering from writer’s block, and amid her appreciation of the romantic qualities of the castle, Cassandra makes sure to point out more practical concerns such as its draftiness as a place to live.

Aficionados of the English novel will immediately recognize (and swoon over) the elements of many a favorite classic: unmarried young women, genteel poverty, the charms of the English country, big old mysterious homes. Alas, the trouble with invoking greats like Austen and the Brontës is that one inevitably suffers by comparison. When a couple of rich, eligible men move to the neighborhood, Cassandra’s older sister, Rose, says, “I thought of the beginning of Pride and Prejudice—where Mrs. Bennet says ‘Netherfield Park is let at last.'” Jane Austen’s masterwork is exalted company, and one is immediately reminded of the fact that the sentence Rose quotes—which kicks off the action of P&P—very economically appears in the first few sentences of that novel, whereas in I Capture the Castle we are kept waiting through two chapters of description and character introductions before we hear about the new neighbors.

Austen’s description of the two possible suitors for the Bennet girls is equally spare and gets right to the point:

Mr. Bingley was good-looking and gentlemanlike; he had a pleasant countenance, and easy, unaffected manners…. [Mr. Darcy] was looked at with great admiration for about half the evening, till his manners gave a disgust which turned the tide of his popularity; for he was discovered to be proud; to be above his company, and above being pleased; and not all his large estate in Derbyshire could then save him from having a most forbidding, disagreeable countenance, and being unworthy to be compared with his friend.

In contrast, the brothers who move into the Mortmains’ neighborhood, Simon and Neil, never come into as sharp a focus for me, which becomes a problem as the romantic intrigues start. Despite their often-described differences, there remains something interchangeable about them in my mind from start to finish.

Of course, it’s hard to live up to Pride and Prejudice, so it seems almost unfair to even mention it. Still, comparison is inevitable with a book that is so much an homage to the earlier novel.

There are also inevitable pitfalls when trying to bring the plot of a classic up to the modern era—Elizabeth and Jane Bennet have an excuse, as it were, for waiting around for marriage: there weren’t exactly a lot of other options at the time. In the 1930s when I Capture the Castle was set, there were presumably a few more ways for middle-class women to respectably make a living. At one point, there is talk of college for Cassandra, and I found myself thinking, “Yes! Go to college! Don’t wait for a man to save you!” But to their credit, Cassandra and Rose are equally uncomfortable with the whole idea of using marriage as a ticket out of poverty.

In fact, what ultimately redeems I Capture the Castle, for me (apart from the irresistible narrative voice of Cassandra), is how conscious the characters are that they are straight out of central casting for an English novel, and how they try to fashion acceptable lives for themselves despite that being the case. Also, I can’t resist how steeped in literature, music, and painting they all are, as these passages attest:

As we walked back to the house [Stephen] asked if I thought that La Belle Dame Sans Merci would have lived in a tower like Belmotte. I said it seemed very likely; though I never really thought of her having a home life.

It was a wonderful moment when Rose stood there at the top of the stairs. It made me think of Beatrix in Esmond—but Beatrix didn’t trip over her dress three stairs from the bottom and have to clutch at the banisters with a green-dyed hand.

“Rose is a Romney,” said Simon. “She’s quite a bit like Lady Hamilton….And Cassandra’s a Reynolds, of course—the little girl with the mousetrap.”

“I’m not!” I said indignantly. “I hate that picture. The mouse is terrified, the cat’s hungry, and the girl’s a cruel little beast. I refuse to be her.”

Though the romantic story of I Capture the Castle left me fairly unmoved, the characters’ voracious love for the arts was love story enough for me. Cassandra and those in her world are always trying to integrate what they have read and seen and heard in the aesthetic realm into their everyday lives, and there’s no faster way to a lettered lady’s heart.