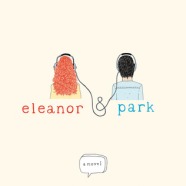 Posted by Laura on August 5, 2013 in Fiction, Novels, Young Adult | Leave a comment

I originally hail from outside of Omaha, Nebraska, so when I recently read about a YA novel by one-time columnist at The Omaha World-Herald, Rainbow Rowell, my curiosity was piqued.  And when I learned that it was also set in Omaha, my intentions to read it were sealed.  Omaha does not often play the backdrop to the novels I read, and not only because I’m often reading books set in London or English villages.  It’s because Omaha and Nebraska and the sea of midwestern states surrounding are not the places, it would seem, where things worth telling happen.

Of course, we all know that things worth telling happen everywhere, and yet it seems appropriately midwestern that the things that “happen” in this novel do so against the will of almost all the characters — including Eleanor and Park, in the beginning.  Forced into uncomfortable physical proximity on the school bus, the two sit it silence for weeks on end and only begin to form a bond — still entirely non-verbal — when Park realizes that Eleanor is reading his comic books alongside him on the way to school.  He begins holding the comics differently and turning the pages more slowly.  He then starts sharing stacks of comic books with her which leads to mix-tapes (this is 1986) which unfolds further into a beautiful, tender, unlikely romance between two vulnerable and guarded teens.

What is utterly enchanting about this novel is how steadfastly Eleanor and Park commit to each other from the moments they begin to open up.  While their relationship is certainly beset by a series of external obstacles, some of which are hard to stomach even for an adult reader, the two have loyal and earnest hearts.  They are exquisite characters, not just hero and heroine in name but in practice, and given that that is a difficult thing for a teenager to be, Eleanor and Park are all the more disarming.

The challenges Eleanor and Park face from the outside world, though a constant source of danger and threat, are peripheral to the real stuff of this story:  the hundreds of seemingly quiet, fleeting, and tiny moments — imperceptible, often, by anyone but the people involved — that somehow add up to a love enormous and consuming.  Any great love story chronicles some of these moments; Eleanor & Park charts them one by one, through a third person limited narrator who bounces between Park and Eleanor’s perspectives.  We witness the first time they meet.  We hear their first conversations about music.  We are there for the first day they walk into school together.  We are in their heads as they make observations, bit by bit, about each other’s bodies, such as when, “[t]hat morning, in English, Park noticed that Eleanor’s hair came to a soft red point on the back of her neck” and when “[t]hat afternoon, in history, Eleanor noticed that Park chewed on his pencil when he was thinking.”  We are there when they hold hands for the first time:

After a few seconds, he reached over and pulled at the old silk scarf she’d tied around her wrist.  ‘I’m sorry,’ he said.

He was still holding the end of her scarf, rubbing the silk idly between his thumb and fingers.  She watched his hand.

He didn’t look up.  He wound the scarf around his fingers until her hand was hanging in the space between them.

Then he slid the silk and his fingers into her open palm.

Later, she wonders, “How could it be possible that there were than many nerve endings all in one place?”  And “if they were always there, how did she manage to turn doorknobs without fainting?”  To the world, none of these moments is earth-shattering, but what Rowell captures so exquisitely is how entirely cataclysmic these small occurrences can be in our own private lives, especially for two experiencing love for the first time.  Collectively, these moments tell an undercurrent of love stories that is, I only realized after reading this novel, all too rarely narrated.

Clearly, I like this book.  I recommend it.  I will keep it in my library for the long haul.  But it also passes one of my litmus tests for determining how good I think a good book is:  how badly, I ask myself, do I want to turn it over and start right back at the beginning?  In this case, I already have.

For further thoughts on Eleanor & Park, see John Green’s review, “Two Against the World,” here and Rainbow Rowell’s website, where she has posted some blog entries about the novel.

← I Capture the Castle Best Books of All Time? →